​In all three prototypes, the lines play an important role. The lines symbolise the absence of colour and simultaneously play the role of light. During the painting process, these white lines affected a particular emotional event that was being finalised within my psyche.
I started painting intuitively to express what was taking place emotionally as well as cognitively within me. It was like phases that could only be completed after it was symbolically communicated, and in that respect, it was a kind of transfer that took place.
That which is usually invisible wanted to be expressed in colour and shape. The lines of light and absence of colour, created spaces in which the tension could escape while at the same time, tension on paper was enhanced.

Only by observing these spaces in the form of line and colour, could the process develop further. As the maturation continued on the emotional-cognitive level, its expression in form also changed. Prototype 1a does not contain words at all. The light lines paved the way for the acceptance of words, messages, or perhaps insights that eventually fill the voids in the unfinished Prototype 1b. It is as if the universe and Father-God, Mother-God, are interceding to complete the growth. In Prototype 1c, it is clear that the self is not able to allow this development independently. The words are entered from above and because these words are The Living Word, it is useful and creative.  ​The conclusion of what was created goes out from the vocal cords and out of the mouth. It is a circulating state, and the circuits expand so that its effect encompasses the whole being.​ 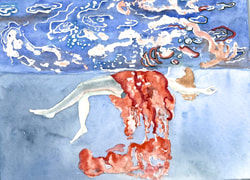 After Prototype 1c was completed, I had a vivid dream. My mother and my grandmother lifted me out of deep water and passed me on to hands that handed me over to more hands until I was set high above the earth on a cloud (the theme of the invisible angel).
From there, I looked down into the water - and this is how the 'Red Karos' developed.
The pain-body was no longer the pain-body  (Richard Rohr, Eckhart Tolle) but found protection and warmth specifically in the wound. It is the ego that is dramatically wounded, and in the second half of life, the personality can see and accept the true meaning of events and find comfort.
Powered by